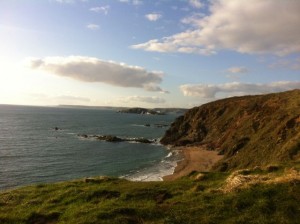 Beaches are one of the main reasons people choose to rent Cottages In South Devon and there are dozens of different beaches to choose from on the coastline from Plymouth to Torquay. Blackpool Sands might have the café, Ayrmer Cove might have the adders and Bigbury might have the giant sea tractor thing but Bantham is probably my favourite of all the beaches in South Devon.

This is a long, gorgeous stretch of sandy beach that seems to run all the way to the horizon when the tide is out. It’s good for surfing, even better for paddling and the Avon Estuary is haven for wildlife. My boy Louie is mad about lizards and snakes and we’re just as happy exploring the dunes behind the beach as we are playing on the beach itself.

Lizard? In Devon? In February?

This time – a bright sunny day in February (and don’t there seem to be more of those these days?) – we decided to forego the pleasures of the beach and head to the left up the coastal path toward Thurlestone, another popular spot for renting cottages in South Devon. That didn’t stop Louie finding a small lizard basking in the winter sunshine about five minutes into the journey – the first of three we found along the coastal path.

The coastal path can be quite a challenging walk in places but the stretch from Bantham to South Milton (where we eventually ended up) is a pretty gentle stroll and even with Darcy, my 5 year old, it only took an hour to get to the café at South Milton – and that was with plenty of distractions on the way.

It’s a beautiful walk – a little blustery on the Bantham side but once you reach the top it’s an easy, relatively sheltered stroll down past Thurlestone Golf Course. Although my wife told me not to share this, there are two little secret beaches that you can only get to from the coastal path – worth bearing in mind as the summer hordes hit Bantham. 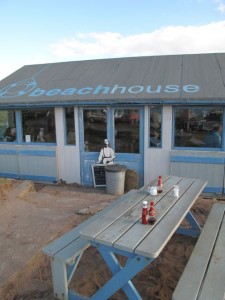 By the time we reached the Beachhouse Café we were past caring about the nomenclature of a strip of sand and more than ready for some thick cut takeaway chips and a hot chocolate. It always seems like a real privilege to get a seat inside the café itself because it’s always so bloody busy and there’s only about 30 seats. I grumbled inwardly at the couples taking up tables that could have sat 4 people and then ordered from the serving hatch outside. I think the only way to guarantee a table is to go when it’s absolutely lashing down when it also has that cosy, ‘sheltered from the elements’ vibe.

Run by the same people that own the White House in Chillington (a lovely little boutique hotel close to Slapton Sands) it’s a really inviting wooden cabin with a rustic, chic feel and the kind of crowd-pleasing food that’s worth making the trip for any time of year. It’s brilliant for breakfast – proper sausages, bacon sandwiches and so on – and lunch – steaks, burgers, mussels and chips, crab sandwhiches and an awesome fish finger club sandwich. It’s open until late pretty much throughout the summer and freshly caught, grilled local fish as the sun goes down is as good as it gets on a South Devon holiday. You can takeaway too – choice is fairly limited but the pasties are top notch.

Because of the café and the car park – both really close to the beach – it tends to be busier at the South Milton end than the Thurlestone end but I’ve never seen it too crowded, even in the height of summer on a blistering day. 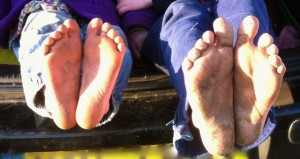 Attracted by the prospect of seeing a dead porpoise we headed back to Bantham via the path overlooking the South Milton Ley Nature Reserve, a 50-acre tranche of reedbed that’s home to dozens of bird species. The porpoise was in a rather unpleasant state of decay so I didn’t take any photos but it’s a beautiful spot.

Of course it took longer to get back but the kids managed to do the whole journey in bare feet – in February!

View all posts by Derryck →